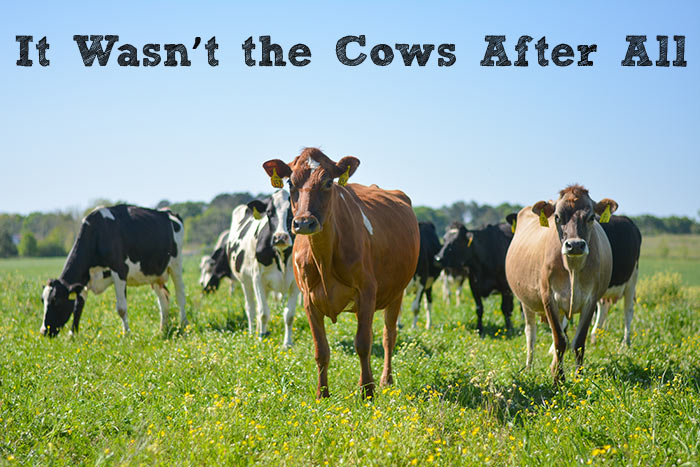 While the cattle industry is repeatedly accused of being the main culprit for increased global methane emissions (and a leading cause for climate change), a new study shows that the fertiliser industry is the root cause.

The report by researchers from Cornell and the Environmental Defense Fund, published in Elementa, shows that emissions of methane from the industrial fertiliser industry have been dangerously underestimated (and, it turns out, based on self-reporting) and the production of ammonia for fertiliser may result in up to 100 times more emissions than previously estimated for this sector. What’s worse is that these newly calculated emission amounts from the industrial fertiliser industry are actually more than the total amount the Environmental Protection Agency (EPA) estimated for all industries to emit across the U.S.

Researchers used a Google Street View car equipped with a high-precision methane sensor to measure the emissions of six fertiliser plants for this study. They drove the car on public roads, downwind from the facilities to record the methane levels in the air. The study reveals an enormous disparity between EPA estimates and actual emissions levels. The team discovered that on average, 0.34 percent of the gas used in the plants is emitted to the atmosphere. Scaling this emission rate from the six plants to the entire industry suggests total annual methane emissions of 28 gigagrams, which is 100 times higher than the fertiliser industry’s self-reported estimate of 0.2 gigagrams per year. In addition, this figure far exceeds the EPA’s estimate that all industrial processes in the United States produce only 8 gigagrams of methane emissions per year.

The fertiliser industry uses natural gas both as the fuel for its operations and as one of the main ingredients for ammonia and urea products (aka the world’s most commonly used nitrogen fertilisers). Since natural gas is largely methane, it has serious potential to be a significant contributor to climate change, and the fact that use of natural gas has grown in recent years has previously raised questions on who’s to blame for rising methane emissions. If it’s been no surprise that natural gas can contribute to climate change, and these facilities rely so heavily on natural gas for production, how could these numbers have been so egregiously underestimated in the first place? It seems this billion-dollar industry made it a point to direct the finger of blame elsewhere.

Now that the fertiliser industry numbers are in, and there is further evidence disproving the widely held assumption that cattle are solely to blame for the spike in global methane emissions, will we stop blaming the product and instead blame the system? If we only move from condemning one product to another, we’ll never make meaningful change. Instead, if we think systemically, there are solutions that can start making a change right now. We’ve said it before and we’ll say it again: When it comes to livestock production, well-managed grazing animals will not only help feed the world sustainably by using pasture, rain and sunshine to make high-quality food, but can even help to mitigate climate change through carbon sequestration. This is a system that works, positively benefiting us and the earth.

It is abundantly clear that agriculture as a whole is still a major contributor to global GHG emissions, and many of its climate change-contributing factors need to come to an immediate end. But suggesting that people go vegan, or limit consumption to a single forkful of meat per day, will not stop global warming. Plants are not the be-all and end-all of a sustainable diet. As it turns out, the chemical fertiliser being used for large-scale vegetable production (or even your backyard garden) has more serious consequences than we ever thought. Choosing products from pasture-based systems can truly impact our world for the better, and with eyes wide open to the facts in front of us, demanding a change to the system itself is the only way forward.

Those of you who know me will recognise my constant refrain around “unintended consequences.” We are now in a scenario where advocates have been pushing chicken and veganism to save the world, and have just learned that all the “data” behind this push is wrong. All of the environmental footprint studies need a re-do. Once cattle—raised on grass without synthetic fertiliser—are accurately assessed, I predict we will be left with chicken and some plant products as top line polluters. As we always say, it’s complicated. But we have to get it right.

Shopping for products that meet your values and expectations is not easy. With a little…